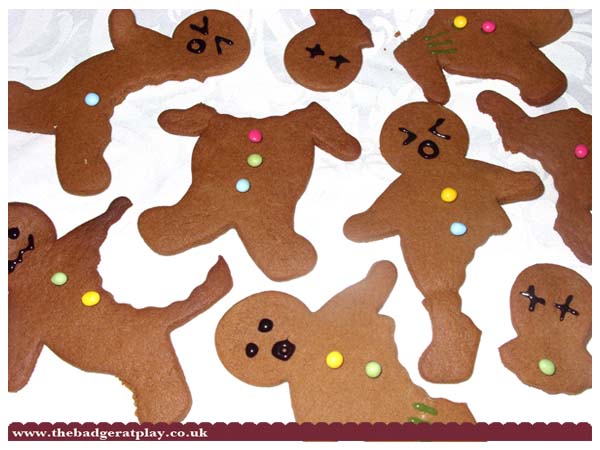 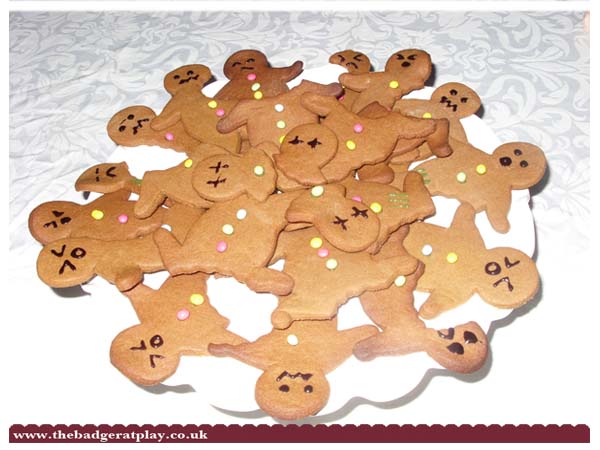 For the church ladies night we were asked to bring Christmas leftovers to eat. I had a brainwave and thought half-eaten food, true left overs! I will admit they are a leftover Halloween idea, but they work well for this night to. It is true to say that I have never successfully made gingerbread in the past so I approached this task with lots of trepidation. After a hunt through all my cookbooks I decided on a recipe that looked right for me and got cracking.

It was great cut out the little men and think about where to put all the bite marks and what limbs would be lost. It was an easy task as I just used a fluted edged cutter (I thought using my actual teeth might be taking it too far) The kitchen looked like a war zone with all the limbs lying around! I did cook these spare limbs, however they were pilfered whilst I was icing the others. A sure sign I had the recipe right this time as my other half and dad found every excuse to be in the kitchen and nick them that night! More fun was had icing all the expressions; pain, bemusement, shock and cartoon death were great. One gingerbread man did have his wound intensified with a little red icing, but I did not do anymore as we all agreed it was a little too gruesome (Hello, like eating dismembered gingerbread men is not disturbing in the first place!!)

Fun was had, chuckles were given to my interpretation of the theme and appreciation was given for my tasty little treats. I even added a few little details, if there was a crack in the biscuit, I added stitches and little buttons were missing on some. I think they were a success. Beats another slice of Christmas pud or a handful of celebrations!!!

One thought on “Leftover Gingerbread Men”