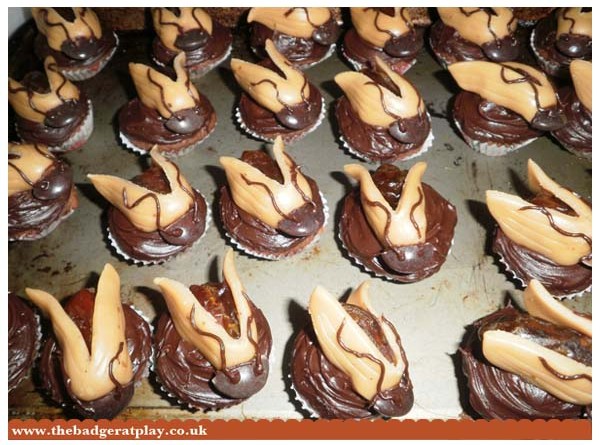 I am not a big fan of the whole Halloween thing, as I said in the Pumpkin Carving post. However I was invited to a Halloween party. I went to this party when I was younger dressed as an M&M, my mum was in America just after she go the invite so went a bit overboard. However being a Christian like me she made sure we did not have the standard scary Halloween costumes, she went as a clown and my dad as a cow!! Over the years we have been invited back to this party but I have been ill or too exhausted to go. For some reason this is a really busy time of year for me. So this year I got to go, it was yesterday as a party on a sunday is not really a good idea!! I though as I have missed this party so often I should make a big effort this year. Bugger dressing up as an M&M this year I thought, I will bake something. I then came across these cupcakes in the Whats New Cupcake cookbook and thought they were perfect. They are not typically scary Halloween, just gross!!!! 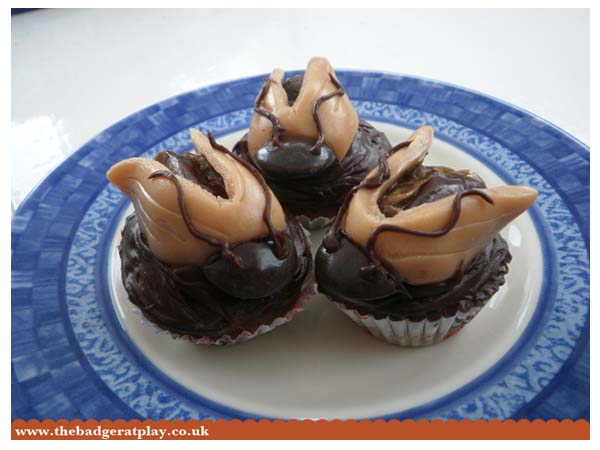 Now the Hello Cupcake and Whats New Cupcake books are not that easy to follow for us brits, we do not have half the sweets or any of the cupcake packet mixes. So I generally use it for inspiration and go through all my other books for the actual recipes and they do not turn out that well. Wandering around a supermarket trying to work out different sweet substitutions is a right pain in the bum! But these were perfectly straightforward. Normal chocolate sponge base, chocolate frosting, dates, minstrels and fudge was all that was needed. I did cheat a little, I normally make the icing from scratch, but I saw the Betty Crocker Chocolate Fudge Frosting and thought bugger it that is tasty and will work soooo well!

The great thing is that these are tiny cupcakes, they are about a mouthful, if you want to be rude and chew with your mouth open, but they are tiny. So you can make loads from one 12 batch cupcake recipe.

It was hard work to soften the fudge into the wing shape, but satisfying when I could eat the leftovers! I also iced on the antennae, I originally was going to use bootlaces, but as I iced on the first bloob to attache the bootlace, I just carried on and it looked fine. Cue eating the bootlaces as I iced the rest!!!

So to make these cupcakes:

2. Take 24 fudge sweets and soften into a flat oval shape. Cut 2/3 down the middle and use the back of a pairing knife to score lines into wings. Place on baking parchment paper as they stick to everything else!

You can mould them a little more to get rid of harsh edges that the knife makes, but you will be handling them a lot more and these will slowly disappear anyway.

3. Take 24 nice looking dates and line them up. Place a little icing on the back of a set of wings, carefully mould them around the date, don’t press too hard or you lose the lines on the wings. Repeat for all dates, again placing on the baking parchment to stop them form sticking. It was at this point that I sort of bent the wings a little, don’t know if it makes them more lifelike but I thought they looked better.

4. Cut 12 Minstrels in half. Dont eat any extras until you have all 24 you need, some will go very wrong!! Ice them a little at the broken end and holding onto the ‘bum’ end of the date squeeze them into place. You want to press quite hard so they look well place with no gaps at the sides. Again set onto the baking parchment as you do each one.

5. Ice one cupcake and place a cockroach ontop. Do them one at a time as the frosting will set and the dates will not stick if you ice them all in one go and then place the dates ontop.

6. Carefully ice the antennae in place. Use a piping icing bag, create a little dot on the head to start with and then draw a line over the body.

I did find having a picture of the final cupcake next to me helped me make sense of all the instructions! It is a little vague, but that is the beauty of these, it is up to you to put your creative twist on them. 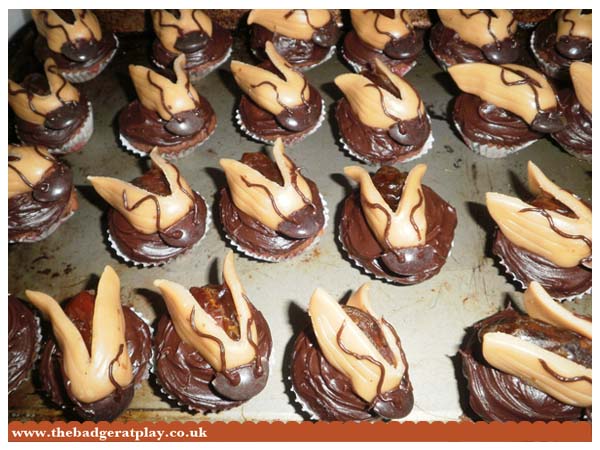